I've been working on a LaserJet M525 for over a week and counting. The initial problem that it was having was that pages were coming out with huge vertical creases on them. After replacing the fuser twice didn't work, along with some other attempts at troubleshooting, I eventually decided to replace the Tray 2 Paper Pickup Assembly (part number: RM1-8505-000CN)

The issue with the page creasing is now resolved, customer says he printed about 200 pages without issue, but now we're getting an issue on Tray 2 where it errors out with 13.B2.D2 , it seems like it is trying to feed paper from Tray 2 but can't, then after a few seconds this error comes up. Trays 1 and 3 print without issue.

During the course of the replacement of the Tray 2 Paper Pickup Assembly, a plastic part fell out and I have no idea where it came from or where it goes. I am wondering if this is the cause of the issue with Tray 2.

Can anyone tell me if this part could be related to the issue with Tray 2? Otherwise, does anyone have any thoughts on how to resolve this Tray 2 issue? Reeeeeally hoping that I don't have to teardown this entire machine again, last time for the Tray 2 PPA was a nightmare...

Thanks in advance!
D

Hi Ryen,
So the plastic piece that you have pictured that fell out is actually not related to the tray 2 pick-up assembly at all. It is actually a cover the goes over the small ribbon cable leading into the laser assembly on top of the machine when the full scanner assembly and output tray are removed. 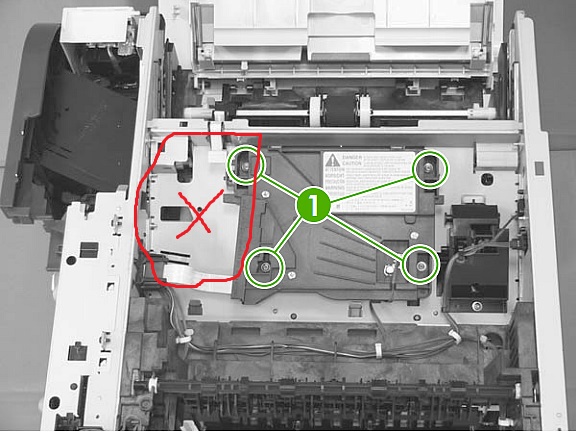